Last night featured one of the best college football games you will ever see and maybe one of the best sporting events you will ever see. The Georgia Bulldogs defeated the Oklahoma Sooners 54-48 in double OT at the historic Rose Bowl in Pasadena, California. The Rose Bowl has always been a historic game but this year the games importance had been magnified even more due to the fact that the winner would advance to the National Championship game in Atlanta on January 8th. The stadium was filled, the bands were playing in full force and even as a viewer at home you got goosebumps as the ball was set to be kicked off. 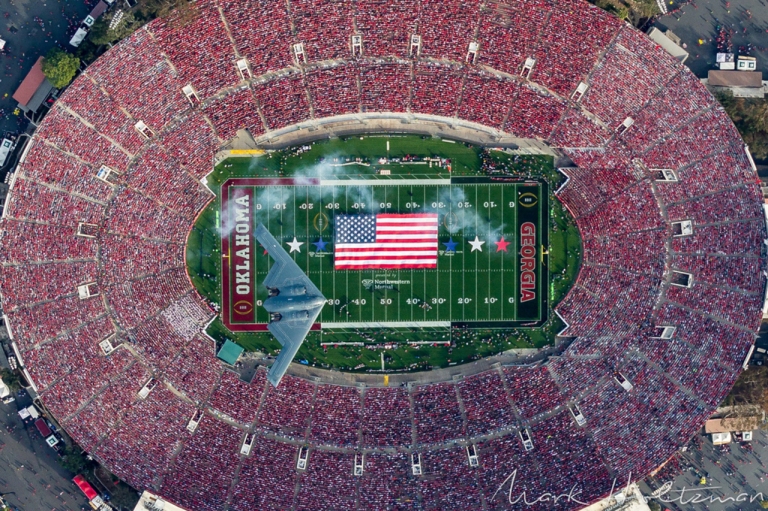 The main headlines coming into this game was Oklahoma’s high-powered offense going up against Georgia’s physical defense. It was clear from a very early point however, that this game was going to be won by the offensive side as both teams were scoring with ease to start the game. Oklahoma’s Heisman winning QB Baker Mayfield was off to a red-hot start and the two running backs for Georgia, Nick Chubb and Sony Michel looked like they were men on a freaking mission.

Oklahoma made it look easy on their first drive. pic.twitter.com/IDdY6mj13n

What a start to the Rose Bowl on ESPN. pic.twitter.com/2Mc5Ucf3T6

For every Oklahoma score, Georgia would have an answer and the two were just exchanged blows like a heavyweight fight. As the half was winding down, the Sooners were up by 10 and at the goal line looking for more. Georgia knew they needed a stop because they did not want to dig themselves back from a 17 point halftime deficit. Oklahoma ran a trick play that was executed perfectly and Baker Mayfield continued his first half  display with a TD catch and the Sooners took a 31-14 lead with 6 seconds left in the half.

There's so much offense in this game, Baker Mayfield is CATCHING TOUCHDOWNS. pic.twitter.com/OyaiK8h8F8

All the Sooners had to do was kick the ball deep and take a comfortable lead into the break. Instead, Sooner kicker Austin Seibert kicked it right into a Georgia player, giving the Bulldogs a chance to salvage some points heading into the half. Freshman QB Jake Fromm threw a great pass to set his kicker up for a 55 yard FG to end the half. Bulldog kicker, Rodrigo Blankenship drilled the long FG and Oklahoma went into the half with a 31-17 lead. An explosive offensive first half was sure to bring an exciting second half and we had no idea how much of a treat was in store for us.

The second half picked up right where the first half started, as Nick Chubb rushed for a 50 yard TD, cutting the lead down to just 7. The Bulldog backs were having an historic day and at one point in the second half they were averaging 19 yards per carry.

Georgia is averaging 19 yards a carry.

That is not a typo. pic.twitter.com/y1Eh06M6oh

To have one running back as explosive as Nick Chubb is something some teams can only dream of but to be complemented by a running back that is just as talented in Sony Michel is just unfair. Oklahoma’s rush defense had no answer the entire night and I have not seen a run game so efficient in years. As the second half went on, Georgia’s defense started to play their style of football, physical as all hell and were starting to shut down Baker Mayfield and the Sooner offense. Even though Oklahoma was still leading by 7, you could start to see the momentum shift in the Bulldogs favor. With 41 seconds left in the third quarter, Sony Michel continued his dominant night with another TD run, this time a 38 yard spurt that tied the ball game up at 31 a piece.

Just like that … Georgia ties it up 31-31 with Oklahoma headed into the 4th quarter of the Rose Bowl! pic.twitter.com/lIlRGFaQYy

Georgia had scored 17 unanswered points and was heading into the 4th quarter with all of the games momentum. The Bulldog defense started the fourth quarter with a huge interception that was returned inside Oklahoma’s 10 yard line. They were now in a goal to go situation form taking the lead and coming all the way back and taking the lead from being down 17. Jake Fromm threw a 4 yard touchdown pass to WR Javon Wims and it seemed like in a blink of an eye the Bulldogs have taken the lead. Georgia was now up 38-31, scored 24 unanswered points and it seemed like Georgia was going to run away with this one.

24 straight points for the Dawgs. pic.twitter.com/Pv0wF5NM92

If you have watched Oklahoma at all this season, you know that sitting down and throwing in the white flag is not an option and they are going to fight until their are 0s on the clock. Oklahoma was in dire need of a TD and who else were they going to call up but the man who has led them all year, their leader, the Heisman, Baker Mayfield. Mayfield construed a beautiful drive that was capped off by a 11 yard TD pass to Dimitri Flowers that evened the score up at 38 a piece. As Georgia was looking to respond, Sony Michel fumbled the ball at midfield and the ball was recovered and taken back to the house by Sooner defender Steven Parker. Oklahoma was now up 45-38 and had taken all the momentum back. This game was turning into a classic and if it would of ended here it would have been a classic in itself.

Georgia had no other choice but to respond with a TD drive, it was that or their season was over. Jake Fromm, the true Freshman QB looked poised and composed during the final drive of the fourth quarter as if he was a fifth year senior playing in front of his home fans during a meaningless game. Fromm lead his Bulldog team down the field and with 55 seconds left in the game, Bulldog RB, Nick Chubb ran it in from the three yard line to tie the game at 45. We were heading to OT in Pasadena. Could you ask for anything better?

We’re all tied up at 45-45 with :37 seconds left in the Rose Bowl! Get to ESPN NOW! pic.twitter.com/ynvwhiW5mU

This was the first time a Rose Bowl had ever gone into OT and the first time a College Football Playoff game has ever gone into OT. This night was turning historic right before our eyes and we were lucky enough to witness every second. Oklahoma won the OT coin flip and choose to go on defense. In Georgia’s first OT possession, they had to settle for a field goal and the same happened for the Sooners, we were heading to double OT and with each breathing second you could feel the magnitude and tension increase in the game. In the second OT, on third and five, Baker Mayfield threw a ball to the end zone, only to be intercepted. But wait, there was a flag on the field. A Georgia defender had jumped offsides and the Sooners were given a second chance. They could not manage to get the ball in the end zone and had to set up for another field goal. Austin Seibert attempted a 27 yard FG but it was blocked, setting up the perfect opportunity for Georgia to win the ball game, all they had to do was to score and they were headed to the National Championship game.

In Georgia’s second OT possession they looked to a man they had gone to all night. Sony Michel had 181 rushing yards on the night to go along with 1 recieveing TD and 3 rushing TD and that third rushing TD sent the Bulldogs to a national championship. Michel ran for a 27 yard TD  and Georgia had won the ball game 54 – 48 in an instant classic.

Georgia now returns home to play for the National championship and will face a conference foe in Alabama who looked sensational on Monday night. It is sure to be an exciting game but to top this one is to be a challenge that might be almost impossible, as this game will be remembered forever. As they say “We do not remember days, we remember moments” and it is safe to say we will remember this moment forever. 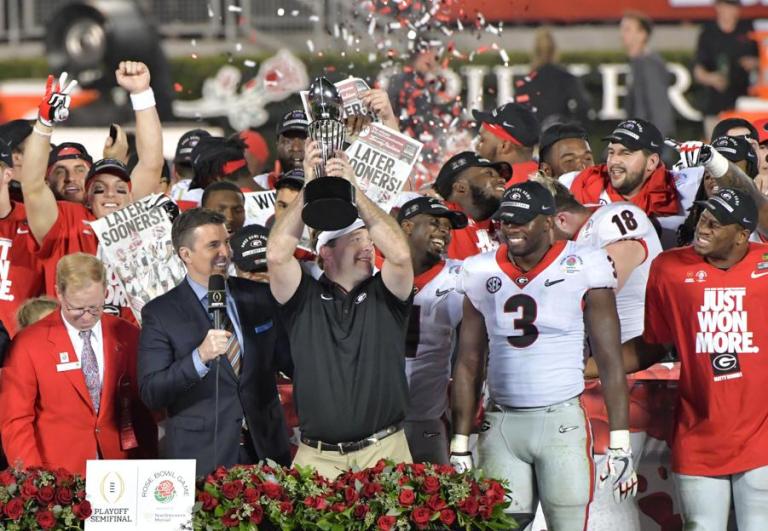