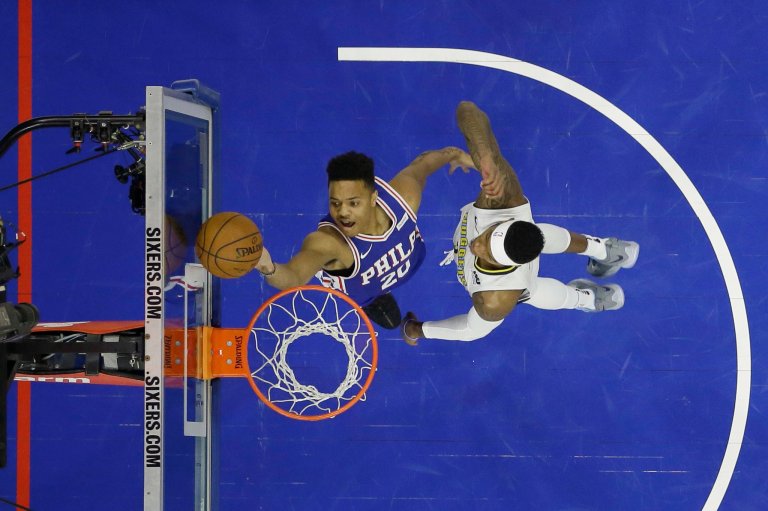 April 13, 2016. The Philadelphia 76ers finished the regular season with a loss to the Bulls which was their 72nd loss of the season. I remember vividly my dad yelling at the TV and saying why do I even watch these clowns. Now that season he didn’t watch as much as me so I did not feel as bad for him. I had sat through an entire season where the team had only won 10 games and lost a whopping 72. Every game was the same, keep it close in the first quarter and then absolutely fall apart. I aged a lot that year and swear that my hair started to turn gray. I knew I had to stay patient though. I knew I had to trust the process. The suffering would be worth it one day, one day in the far far future. Fast forward 2 years to almost the exact date, the suffering was more than worth it. The day has come, the realization has hit, that trusting the process was worth it. That sticking with this team through the highest highs (very slim) and the lowest lows was well worth it. Playoff basketball is coming back to the great city of Philadelphia. Fans, THE SUFFERING IS OVER, THE WAITING IS FINISHED AND IT IS OUR TURN, OUR TIME TO HAVE FUN. Last night, the Sixers won their 7th straight game, chalked up their 43rd W of the season and are giving the fans what they have only dreamt of in the recent years. Along with the win, the Sixers returned their number one overall draft pick in Markelle Fultz, who had previously missed the last 54 games with an injury. Fultz finished the game with 10 points, 8 assists and 4 boards. He looked confident and the Wells Fargo Center was electric throughout the night as Fultz’s return had been long overdue. As I’m writing this blog, I can’t help but smile. Like lets not just talk about the Sixers but Philadelphia sports as a whole for a second. I am as passionate and as loyal of a Philadelphia sports fan as you will ever meet. With that however, comes a lot of hard ships and in the past 5 years that has never been more true. The Phillies were awful, the Birds had a guy named Chip who don’t even get me started about him, the Flyers couldn’t win a playoff series and the Sixers had been the laughing-stock of the NBA. But now, on March 27th, 2018 the tides have turned and this city has been totally flipped around. The Eagles are fresh off their first ever Super Bowl victory, the Phillies are filled with young talent and are two days away from started their track to success, the Flyers are gearing up for a playoff push and the Sixers, oh the Sixers, are the most exciting team on hardwood. This is what happens when you stay loyal and stay patience. Good things come to those who wait. Now it’s time to sit back, relax and enjoy the ride that this city is about to go on. Trust the process baby!