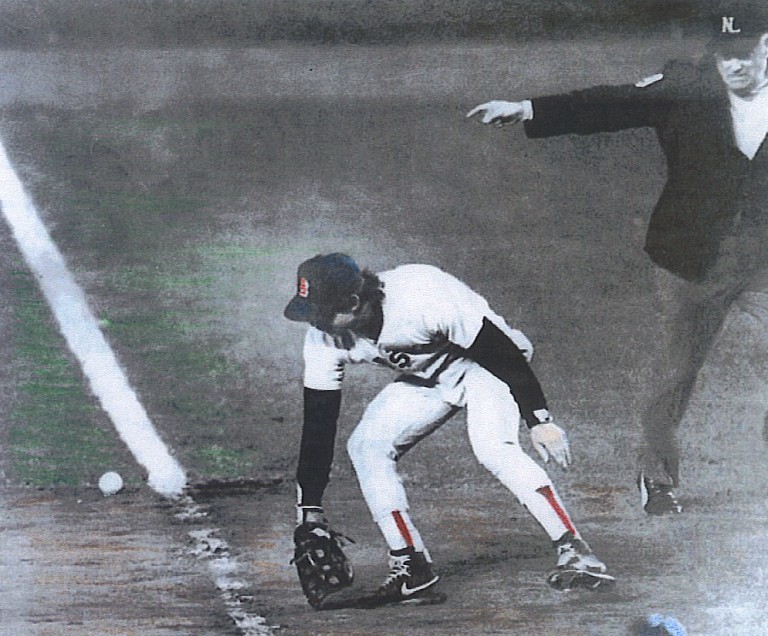 Story time here at GBD HQ. This is a new series I want to introduce where me and the other writers on this site recall childhood memories and illustrate them for you, the reader. Some good, some bad and some flat-out ugly. This first story I am about to embark on is one of the darkest childhood memories I had ever endured as a kid and is a moment that still haunts me today. I now present you with the story of  the day I became Bill Buckner.

Let me set the scene for you leading up to the moment so you can feel like you were a spectator in the stands when this kid became a laughing-stock for years to come. I was about 7 years old and was currently playing at Nottingham Little League. For those of you that don’t know, NLL is one of the most prestigious little leagues in all of NJ and it is considered to be an honor to play there. At the time I was playing at the C league level which can be compared to a double A affiliate team in a professional baseball organization. When you got older you moved up to B league which was like AAA and then eventually around your 11-12 year old year, you got to make the A league. The majors baby. The A leaguers got to play on the biggest field and got to play under the lights. I looked up to those kids as a C leaguer, in hopes to one day be one. One incentive that the “minor league levels” had been that if you won a certain amount of playoff games, you got to play the championship game on the A league field at the end of the year picnic. This picnic was attended by the whole LL community and was a huge deal. This is what I played for all year. I wanted to play on that big field in front of a big audience. I wanted to feel like a big leaguer for a day because what kid doesn’t growing up.

I remember that season we were good, like really effing good. I was the starting second baseman and let me tell you something, you could have called me the Robinson Cano of little league baseball. I was as smooth as they came and put on a show for the fans in the stands. Heading into the playoffs that year, we were the top seed. This means that we earned a bye and would only need to win two games to play on championship Saturday on the big field. Now I may have only been seven, but sports at an early age were everything to me. I was as competitive as a kid as you would ever find and I would give an arm and a leg for a W. Baseball was always my favorite sport, so my effort and intensity towards the game has always been heightened a bit. The first game of the playoffs had arrived and I feel bad that the other team even had to show up and play on the same diamond as us. We chewed em up, spit them out and were onto the semi final. We were now just one game away from playing on prestigious championship Saturday.

Coming into that semi-final game I remember vividly that I did not have a single nerve in my body. I would usually be nervous for a game of this magnitude but coming into this game, I knew we were the better team. We were the best team in that league the entire season and if we played our brand of baseball, we were going to win. The game began, and it was clear that this was no regular season brew ha ha. The stakes were raised and this one was going to be personal. Heck, I even wore my lucky eye black that day. Now since I was only seven, the 1st through 5th innings were a tad blurry and all I remember was that we entered the last inning with a two run lead. I do however, remember the last inning in great detail, as it is a memory that makes me cringe up in a ball and go numb even today. The opposing team managed to get a few base hits and before you knew it they had bases loaded, with the winning run at first base. Fortunately for us, we had managed to scrap two outs and were just one out away from clinching our ticket to the ship. I’m standing at second thinking to myself “are we gonna dog pile” who am I gonna thank first. Anyway, on a 2-1 count a ball gets hit sharply to me and I am thinking “We won, I have not made an error all year, let’s go home.” I field the ball cleanly and fire the ball to first. What I did not realize, was that I did not give the first basemen enough time to cover the bag and therefore, the ball was thrown to the fence. The ball took a funky hop, which did not allow the baserunners advance an extra base. Bases were still loaded, there were still two outs. But the lead had been cut down to just a run. The margin for error had disappeared and for the first time that day I began to feel some nerves.

I still felt like we had the game though, if I just took a deep breath and composed myself, I was going to make sure my team would come away with a win. What happened next was all in slow motion and literally shattered my confidence as a ballplayer for upwards of a decade. On the first pitch, the batter made contact with the ball and once again, it was headed straight for me. I knew this was my chance for redemption. I got in position was ready to make the play and as I look down to see the ball go into my glove, it hits a stone, moves about an inch to the left, and goes right through my legs. Bill Buckner style. As I turned my head the ball was in the outfield, I turned my head once more and they were rounding the winning run home. Holding back tears I yelled at the right fielder to throw home. He air mailed it and the winning run had scored. The game was over. The season was over. And I thought my life was over. I remember just dropping down to a knee, and covering my sandy glove in my tear ridden face. I had let not only myself down, but my team down. I remember my coach came to pick me up and take me to the handshake line and looking back on it, I can only imagine what I must have looked like with the eye black running down my face. To me, baseball is more than a game so in that very moment, nothing else mattered. I wanted more than anything to play on the big field on championship Saturday and that was not going to happen because of ME. I continued to cry, and cry, and then cry some more. Through dinner, through play time, through it all. The one thing that did cheer me up just a tad was when we got home my dad told me to jump in our pool with my jersey on and all. To let my anger and emotions out in the pool and leave them there. I did, at least I tried but it was hard.

I am now 19 years old and it has been 12 years since that dreary day occurred. I still remember like it was yesterday and don’t think I will truly ever be able to get over it. I should of made that play and we should have won the championship that year.

I hope you guys enjoyed my story and got a laugh over my misery. If you would like to see more of this type of content let me know in the comments below or contact me on twitter @Petersnyder23.