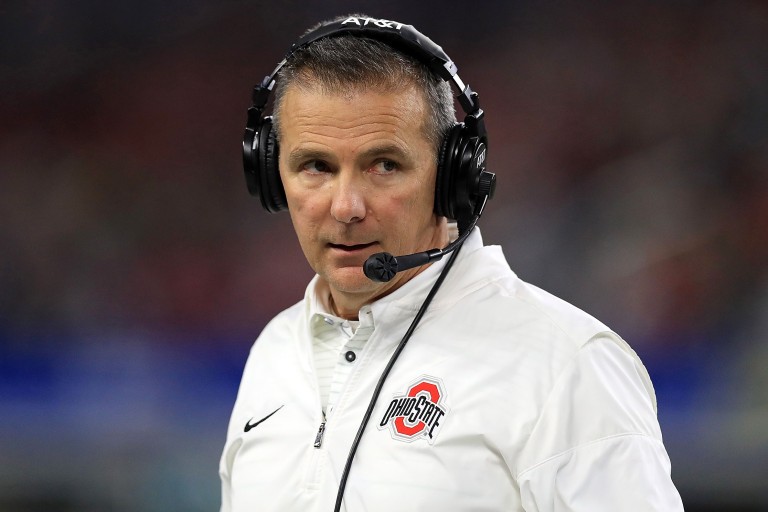 I am currently sitting on the beach in Long Beach Island with my toes submersed in the sand, taking it all in. I am trying this whole “blog from your phone” phenomenon, so if it is a tad choppy I apologize. Anyways, as I was sitting on the deck of my shore house last night taking in the sights and sounds that comes with the shore, I was abruptly interrupted by the breaking news signal roaming across my Twitter timeline, as if it were the Batman signal. I quickly rushed down stairs and flipped on ESPN. There it was. “Urban Meyer has been suspended without pay for the first three games of the 2018 College Football Season.” My first thoughts were “Of course.” We are in fact, talking about a legend here and there is no way in hell that Ohio State University would do any more to Meyer than a measly slap on the wrist. The matter of the fact is, Urban Meyer kept a serial abuser on his staff for upwards of three years and although he followed proper protocol when given the information he was given, could have done much more. Let’s cut the shit right now, if Urban Meyer really cared about the character that his staff portrayed, he would have fired Smith’s ass in 2015. He has the power to do so but simply failed to take action. The point as when I get most infuriated with this verdict is when I put myself in the shoes of not only Courtney Smith but also, the parents of these Ohio State athletes.

Let’s start with Courtney Smith. Lets all pretend we are her for a second in current day. Courtney Smith woke up yesterday morning, she eats her breakfast in a state of pain and utter tarnish and she has been both mentally and physically abused by Zach Smith for years. She does have a glimmer of hope however as a man who kept her abuser on his staff for 3 years could finally gets the justice he deserves. She knows in her heart that Meyer knew exactly what was going on with Zach and knows that besides telling a hierarchy, did nothing about it. Shit, she even texted Meyer’s wife as a plea for help and because he was a good FOOTBALL COACH, continued to coach on the staff. Fast forward a few hours and Smith sees the news pop up that not only has Urban not been fired, but will be back coaching by week 4. She is disgustied and heartbroken as this man who has an astronomical amount of power will never be taken down. Like it or not, domestic violence is a major issue and is not taken nearly as seriously as it should be. Although Meyer was not a direct abuser, he was part of a cover up and could have done something to make a statement that this will not be acceptable. What message does this show to society? That you can just cover up issues and all that will happen will be a slap on the wrist? If that is the case, how is this toxic culture associated with college football ever going to stop? Even if Meyer told someone about Smith in 2015, he had the power to do much more. The analogy I made to my friend was simple. If you are a principle of a school and are walking past two kids beating the shit out of each other are you going to A run and tell a security guard, who will eventually break up the fight or B take matters into your own hands and break it up on the spot. Although both are considered to be the right choice as the issue will end, one is the morally right thing to do and I don’t have to tell you which choice that is. As a leader in which Meyer is, you are given a responsibility. A responsibility to not only lead, but lead by example and always do the right thing. People look after you as you are the leader of the ship. You are supposed to be a role model for these young college athletes Urban and guess what, you failed and are going to have to live with that for the rest of your life.

Now let’s put ourselves in the place of a parent of an Ohio State football player, more specifically the mother of one J.T. Barrett. During the summer of 2014, Stacy Barrett was getting ready to go through one of the most difficult transitions a mom ever has to go through, sending their baby boy off to college. As scary as it seems, Stacy felt some sort of  relief as she was promised J.T. would be taken care of by Meyer and the rest of the Buckeye family. When coach Meyer visited Barrett’s Texas home for a recruiting visit, he promised them that J.T. would not only be given a chance to succeed at the athletic level, but would also be taken care of, mentored and overall come back to Texas as a better man than when he left. Fast forward to 2018, and Stacy sees the news regarding domestic abuse  allegations against former Ohio State coach, Zach Smith. She is shocked and outraged. Although J.T. is no longer at Ohio State and is now playing in the NFL, while he was at State, so was Smith, who was promised to be a mentor and leader for Stacy’s son.  She than finds out that Urban Meyer had allegedly knew about these allegations that were surfaced in 2015, and kept Smith on the staff. She is even more furious and feels like she was totally lied to during that recruiting visit. She was promised that Barrett would be molded and mentored by the best people around but instead was around an abuser who beat the shit out of his wife and a Head Coach who allows this sort of behavior to happen without any real punishment. It is frankly, quite sickening when you really wrap your brain around it and this is only one case of dozens upon dozens of promises that were broke by Meyer.

To conclude, I will say this. I do not believe that Urban Meyer deserves to coach at Ohio State University anymore. I don’t care how great of a football coach he is and I don’t care who he told about what he knew. The fact of the matter is, Meyer had the opportunity to fire a man who was being accused of beating his wife repeatedly and he failed to do so. He kept the matter private and it took a report for this news to come out. If this report never came out, Smith would still be on the Buckeye coaching staff and would still be passing along his evil morals against young minds. Meyer was forced to fire Smith and that is a problem. To anyone that is being abused out there in any way shape or form, do not think this is the norm. Do not think it is normal to cover a scandal up and keep and abuser on your coaching staff. What Meyer did was wrong, unjust and selfish. He will learn no lesson or change his ways by serving this punishment. This does nothing for him. I am ashamed of Ohio State for not having the cahoots to fire this man of great power. Sometimes the final score of a football game should not matter, this is real life and is so much bigger than a game.