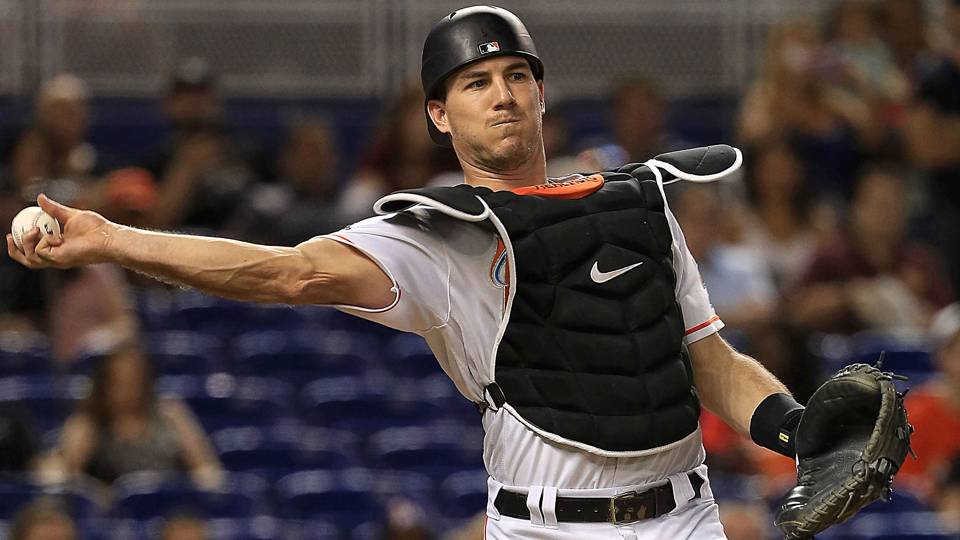 Phillies fans, get excited, because the next big thing is coming to a city near you. Earlier today, it was announced that Marlins superstar catcher, JT Realmuto was traded to the Philadelphia Phillies in exchange for Phillies top prospect Sixto Sanchez, catcher Jorge Alfaro, and lefty prospect Will Stewart. At the young age of 27, Realmuto has yet to reach his full potential and is only going to get better with time. In his 5 years as a major league ballplayer, Realmuto has accumulated over 500 hits, has clubbed 59 career HRs and has driven in a total of 243 runs. In 2018, Realmuto fully solidified himself as an elite player in this league as he finished the year with a .277 batting average, hit 21 home runs while playing in the biggest ballpark in baseball, and drove in 74 runs. He also hit 30 doubles, collected 132 total hits, and was an absolute unit behind the backstop. This breakout year did not go unnoticed however, as Realmuto made both his first All Star game, and earned a Silver Slugger award at the end of the season.

The Phillies are in agreement to trade for JT Realmuto for Jorge Alfaro, Sixto Sanchez, Will Stewart, and an international bonus slot per @JeffPassan pic.twitter.com/jij2g9NQtn

Although it is a shame that the Phillies had to give up their top overall prospect in order to land Realmuto, I cannot stress enough just how crucial this trade is. For starters, JT brings a reliability to the backstop that the Phillies have been lacking over the past couple of seasons. Although Jorge Alfaro had a cannon of an arm, he made way too many mistakes and cost the Phillies some valuable wins. JT is not going to make those mistakes. He makes the right throws, he blocks balls that look seemingly impossible to block and it is the minute details like those, that can turn your ball club from good, to elite. Secondly, JT Realmuto is the best hitting catcher in baseball, and there is no if ands or buts about it. The fact of the matter is, JT Realmuto is going to hit 30 HR next year and the runner-up at the catcher position may not even reach 25. The fact that Realmuto hit over 20 HR last year, while playing 82 games at a sink hole they call Marlins Park is absolutely astonishing. With a hitters park like CBP becoming JT’s new backyard, I can assure you he is going to be a HR hitting, extra base smashing machine in 2019. Realmuto also led all major league catches in both extra base hits and total bases in 2018. The third and final reason this trade is a win for the Phillies, is because it is an alley oop to get Bryce Harper. As you all may know, Bryce Harper is still a free agent and has yet to sign with a team for the upcoming season. By snagging Realmuto, the Phillies become instantly more attractive to Harper and make Philly a much more enticing place to play. If the Phils can find a way to land Harper in the upcoming weeks they will not only become the new favorites in the NL East, but will become the favorites to win the pennant in 2019.

Possible Phillies' lineup if they finish the Realmuto trade, and followed up later with the signing of Bryce Harper:
LF McCutchen
SS Segura
RF Harper
1B Hoskins
C Realmuto
CF Herrera
3B Franco
2B Hernandez

With the prior offseason acquisitions of all-star Jean Segura, former MVP Andrew McCutchen and potential Hall Of Fame reliever, David Robertson, the Phillies look like they are just one step away from “completing the process.”

PS. As a die-hard Phillies fan, it was so hard not to burst with excitement while writing this, LETS GOOOOOO!

If a JT Realmuto trade ever ends up happening, remember that he's been murdered by his home park more than any hitter basically on record. Going just about anywhere else could make him look even better.