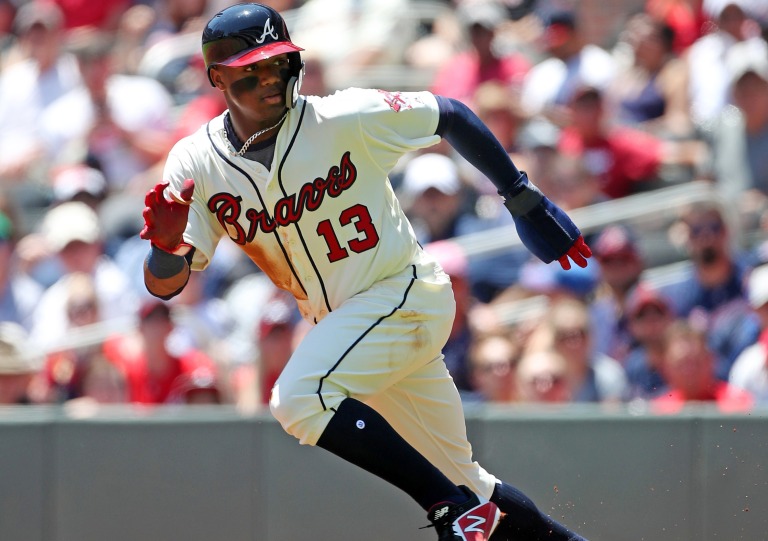 Before we start talking about the top 5 LF in major league baseball, I would like to get some things off my chest. For starters, this list was the hardest to make by far. There are certain guys on this list who play left field, but also play in the DH role at the same time. So as far as this list is regarding, the requirements to make it were that you had to play at least 40 games in left and if the DH was taken away, left field is where you would wind up. With that out of the way, let’s start the list with a guy who caught fire after being traded in the dog days of summer.

Exactly a year ago, while writing these same pieces, I placed Tommy Pham on the list for the top 5 CF heading into the 2018 season. He had just come off a really good year in which he batted .306 and felt that the sky was the limit for this up and coming star. Then, as the 2018 season commenced, something looked off with Pham. The explosiveness he showed in 2017 was not there anymore and he was kinda just hanging fruit on a nightly basis. Through the first 98 games of the season, Pham had only hit for an average of .248, hit 14 home runs and drove in just 41 runs. Then magic struck. Pham was traded to the Tampa Bay Rays and was going to play for a team that was in desperate need for OF talent. They had gold glover Kevin Kiermaier, but needed a quality left fielder and needed one fast. Pham took on the role with flying colors and fit in like a baby fits into their mother’s arms. Pham had gotten his swagger back and was one of the hottest hitters in baseball during the month of August. With Pham’s help, the Rays made a huge second half surge and finished the season with 90 wins. In just 39 games played with the Rays, Pham had managed to hit for a .343 BA, had a staggering 1.071 OPS and a .448 OBP. These numbers are huge for Pham’s confidence heading into the 2019 season. He may not have started the way he wanted to, but he sure as hell finished it and has found his new home in Tampa. I expect Pham to have a huge 2019 and feel that he will not only make his first all-star game come July, but could even be taking home some hardware come season’s end.

Marcell Ozuna is a nut I have yet been able to crack. If you asked me to make this same list a year ago, I will probably put Ozuna at the top of the list. He was coming off a star-studded 2017 campaign with the Marlins in which he hit for a .312 BA, slugged 37 homers and drove in 124 runs. He had also been shipped to St. Louis over the offseason and was excited to start his new journey in one of the most historic cities in America. But as the 2018 season came around, Ozuna failed to live up to the hype. Now, we have to keep in mind that following up a 37, 124 season can be extremely difficult but I can assure you, Cardinals fans expected more. The plays he would make with ease in Miami, became a struggle in St. Louis and the power that we saw in 2017 had dissipated, substantially. When his debut season with the Cardinals was all said and done, Ozuna had batted for a .280 average, had hit 23 home runs to go along with 88 runs batted in. These numbers are not awful, but they can be a lot better. We know how special of a player Marcell Ozuna is capable of being. He is a guy that can hit 30 home runs in a season while driving in 100 runs in the blink of an eye. For Cardinals fans sake, let’s hope this somewhat of a let down season was just a season of adjustment, and not a preview of things to come. If this decline continues in 2019, Ozuna will find himself off this list and may even find himself fighting for a job.

At the young age of just 20 years old, Juan Soto has captured the hearts of baseball fans across a nation. When Soto made his major league debut on May 20, 2018, few knew what to fully expect. Soto had expectations of being great, but the general public questioned if he was too young for the bright lights as he was just 19. Soto took these naysayers and turned them into believers quicker then Usain Bolt running a 100 meter race. He had shown glimpses of greatness that we haven’t seen since Griffey Jr. He had shown a power display that was thought to be long gone after Bonds. For a kid that is yet to be able to legally drink in the United States, Juan Soto is mature far past his given age. As the dog days of summer dragged on, Soto began to get better and grow stronger with every game he played. He became smarter and extremely disciplined at the plate. He became more aware in the field and quicker on the base paths. In front of our own two eyes, we were witnessing the birth of a star. By the conclusion of his rookie season in 2018, Soto had hit for a .292 BA, had cranked 22 home runs, and finished with an unfathomable OBP of .406. It is actually hard to wrap my head around the fact that this dude is only twenty years old. TWENTY. I am 20 and I am here admiring a guy who is the same age as me. Soto is just starting to get his feet wet in this thing they call baseball and is going to be a star in this league for a long, long time.

In the early 2010’s, David Peralta was just a name. He was a man who was battling day in and day out in the independent leagues, in hopes to one day make it to the major leagues. Almost a decade later and Peralta finds himself as the second best left fielder in baseball. This is a feel good story. Now, I’m gonna be honest with you guys. By first glance, Peralta is not number two on this list. He is not a guy that you would pay the price of admission to see and is not a player that is considered to be “elite.” However, when I truly dove into his stats and saw what a remarkable 2018 season he had, I was blown away. Peralta finished his 2018 campaign with a .293 BA, a .352 OBP, had accumulated 164 total hits and had cranked a career high 30 home runs. This great season earned him his first Silver Slugger award and gave him the national recognition he so yearningly deserved. The thing that I like most about Peralta, is his approach in the batters box. He is a very patient batter and makes pitches come to him, rather than chase balls out of the zone. He is also very good at taking balls where they are pitched and is one of the best opposite field hitters in baseball. The question now looms, can Peralta duplicate his 30 home run season in 2019. And if I shall make a bold prediction, I think he will finish with more. With A.J. Pollock and Paul Goldschmidt now gone, Peralta is going to be asked to be the main power source for the D-Backs. If you know anything about Peralta as a man and as a ballplayer, you know that he will never shy away from a challenge. I expect Peralta to have a huge 2019 season in which he will make his first all-star game in July, hit 33-35 home runs and feel that his greatness in this league, has just started to scratch the surface.

About two years ago, when Ronald Acuna Jr. was making his rounds in the minor league circuit, I made a prediction to my father. I told him that there was currently a young prospect in the Atlanta Braves system who was going to be the next superstar in our game. I said that Acuna would not only win the rookie of the year award when he came up, but predicted that he would win MULTIPLE MVP awards, make more All-Star games then one can count, and will one day, be on the Mount Rushmore of active major league baseball players. I stick to that statement today. In all my years of watching professional baseball, I have never seen the raw talent and potential that I see in Acuna Jr. Acuna is not just good, he is special. The athleticism he shows in everything he does, is graceful. The sheer, natural talent he displays on a baseball diamond is jaw dropping. Acuna is the type of player I have been waiting to watch my whole life. In 2018, Acuna finished his rookie season with a .293 BA, a .917 OPS, swiped 16 bags, hit 26 doubles and crushed 26 homers. As a reward for his stellar rookie campaign, Acuna was presented with the 2018 NL ROY Award. Although these stats may be impressive, I can not stress to you guys enough, that this isn’t even the beginning of what you are about to witness. In the next few years you can expect Acuna to be a 30 home run, 40 double and 30 stolen base MACHINE. He will also get more mature in the field with time and will take home a gold glove before you know it. How good of a 2019 season is Acuna gonna have you may ask? Well I’ll say this, he is my official dark horse to win the 2019 NL MVP. (Mic dropped.)

Ronald Acuña Jr. with a nice over the shoulder catch in center during #Braves outfield drills. pic.twitter.com/7b97L9vRtD