When the Philadelphia Phillies ended their 2018 season on one of the lowest lows a team can experience, it was clear that a change needed to be made. As the offseason loomed, Phillies owner John Middleton made a comment that would not only bring an eventual change to the Phillies clubhouse, but a comment that would get the league talking about the Phils for the first time in quite a few years. When referring to his approach coming into the offseason, Middleton stated ““We’re going into this expecting to spend money,’’ Middleton told USA TODAY Sports. “And maybe even be a little bit stupid about it.’’ This statement sent shock waves across Major League Baseball and a billionaire from Harvard, quickly became front page news. With this statement however, came not only expectations to deliver from spectators across baseball, but expectations from the fans of Philadelphia. If an owner is going to make such an intrepid statement, he better have the cojones to back it up.

The first move that showed Middleton was going to put his money where his mouth was, came in the likes of Jean Segura, who came to the Phillies via trade during the offseason. Segura, a 29-year-old from the Dominican Republic, is one of the most underrated hitters we have in our game. Segura is currently one of only three major league ball players to have hit for a .300 BA or better, over the last 3 seasons. Segura is the type of guy who is going to get on base for you, score runs, make plays and put asses in the seats. What more could you ask for? Segura is looking to carry momentum with him during the 2019 season, as he is coming off a tremendous year, hitting for a .304 BA, collecting a .341 OBP, scoring 91 runs, slugging 29 doubles and making his second career all-star game in July.  Another trait that Segura possesses that I feel will do wonders for the Phillies come 2019, is his durability in the field. Last season, the Phillies were one of, if not the worst fielding team in the majors. They made errors upon errors on a nightly basis and at times, it became hard to stomach. Segura brings a durable, reliable glove with him that will help the Phils in more ways than one. All in all, I think this was a perfect trade for the Phillies and think Segura is going to fit in perfectly in his new home that they call the city of brotherly love.

The next move that Middleton made in his conquest of spending stupid money, was signing former MVP Andrew McCutchen. Growing up as a kid, Andrew McCutchen was always a player I idolized and in many ways, was a role model. I remember being in such awe every time he came into town, as he was so athletic in the field, and had a swing that was more aggressive than a grizzly bear. Fast forward a hand full of years, and the gold glove winning, 5-time all-star, 4-time silver slugger, former MVP is now on my favorite team. It is funny how life comes full circle sometimes. With all this being said, I was quite skeptical when the Phillies first signed Cutch for a 3-year, $50 million contract. I mean, the guy is 32 and is coming off of a season where he hit for an average of just .255 to go along with hitting a meer 20 HRs. I wasn’t sure if this move was necessarily worth the money, but I can now say that I was happily proven wrong. McCutchen has been a force thus far this spring and has shown he has still got what it takes to be an elite major league ball player. He is now expected to be the Phillies everyday leadoff hitter in 2019, and I could not be more excited. Welcome to the squad.

If the Phillies haven’t yet proven to you that they were the most active team in the 2019 offseason, these next two moves will blow your mind. Starting with JT Realmuto, this was a move that not many people could have expected. Earlier this offseason, it was announced that Marlins superstar catcher, JT Realmuto was traded to the Philadelphia Phillies in exchange for Phillies top prospect Sixto Sanchez, catcher Jorge Alfaro, and lefty prospect Will Stewart. At the young age of 27, Realmuto has yet to reach his full potential and is only going to get better with time. In his 5 years as a major league ballplayer, Realmuto has accumulated over 500 hits, has clubbed 59 career HRs and has driven in a total of 243 runs. In 2018, Realmuto fully solidified himself as an elite player in this league as he finished the year with a .277 batting average, hit 21 home runs while hitting in the biggest ballpark in baseball, and drove in 74 runs. He also hit 30 doubles, collected 132 total hits, and was an absolute unit behind the backstop. This breakout year did not go unnoticed however, as Realmuto made both his first all-star game, and earned a Silver Slugger award at the end of the season. 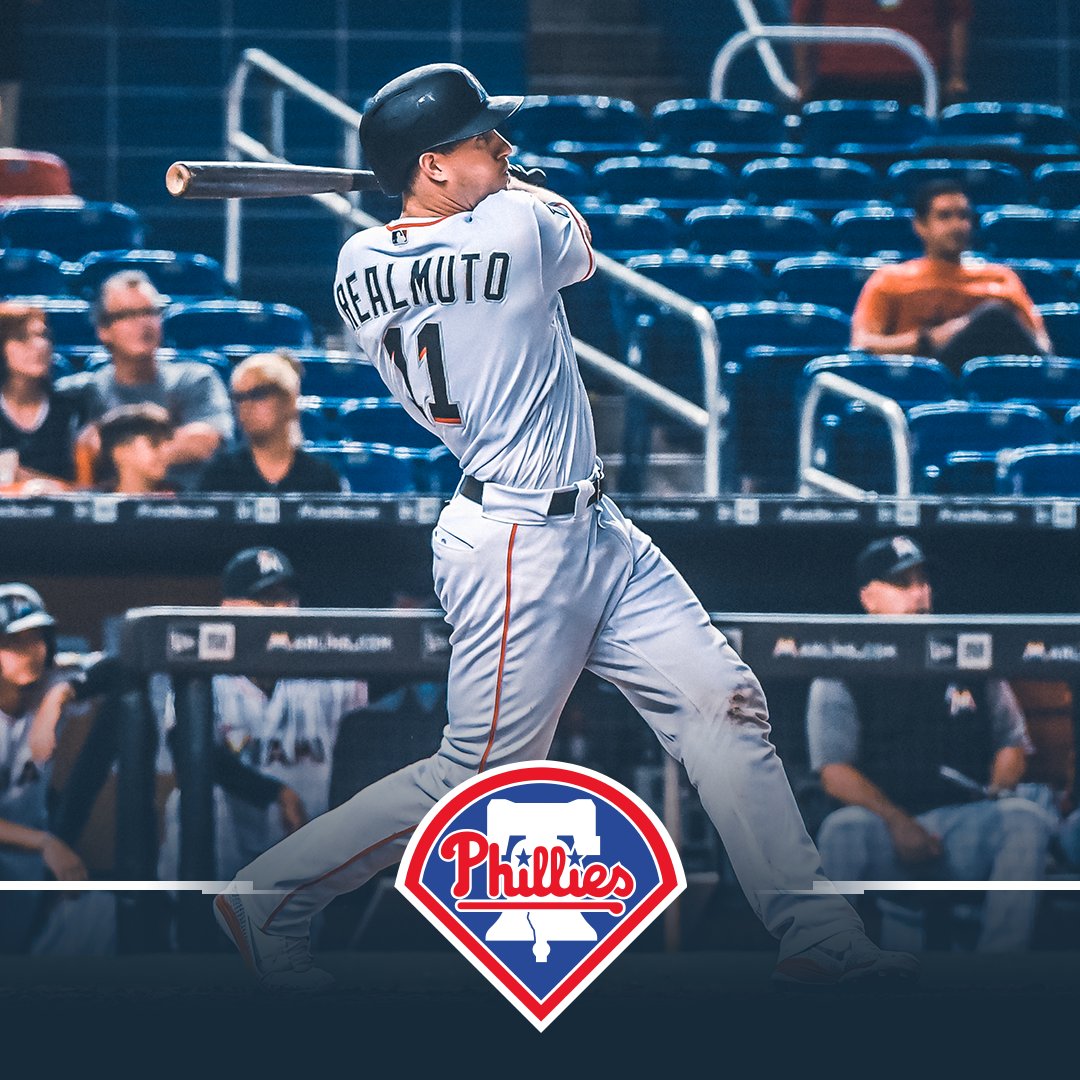 The Phillies are in agreement to trade for JT Realmuto for Jorge Alfaro, Sixto Sanchez, Will Stewart, and an international bonus slot per @JeffPassan

Although it is a shame that the Phillies had to give up their top overall prospect in order to land Realmuto, I cannot stress enough just how much of an impact JT is going to have on this team it 2019. For starters, Realmuto brings a reliability to the backstop that the Phillies have been lacking over the past couple of seasons. Although Jorge Alfaro had a cannon of an arm, he made way too many mistakes and cost the Phillies some valuable wins. JT is not going to make those mistakes. He makes the right throws, he blocks balls that look seemingly impossible to block and it is the minute details like those, that can turn your ball club from good, to elite. Secondly, JT Realmuto is the best hitting catcher in baseball, and there is no if, ands or buts about it. The fact of the matter is, JT Realmuto is going to hit 30 HR next year and the runner-up at the catcher position may not even reach 25. The fact that Realmuto hit over 20 HR last year, while playing 81 games at a sink hole they call Marlins Park is absolutely astonishing. With a hitters park like CBP becoming JT’s new backyard, I can assure you he is going to be a HR hitting, extra base smashing machine in 2019. Realmuto also led all major league catches in both extra base hits and total bases in 2018. This is a match made in heaven and Phillies fans better get excited, because CBP is going to become a bachelor’s paradise all summer long.

Okay, I’ve been teasing this for the entire article and I know the reason you are all here is for one man and one man only, Bryce Harper. You wanna talk stupid money? How does a 13-year, $330 million contract sound? John Middleton ended his quest of spending stupid money this offseason in jaw dropping fashion, as the Phillies acquired superstar OF, Bryce Harper. Let’s first rewind however, to late November. Coming into the offseason, there were two main free agents that every team that had a dollar to their name, wanted. Bryce Harper and Manny Machado. The Phillies made it clear early and often, that they had interest in both, as they scheduled meetings with the players and their agents in hopes to get a deal done. Unfortunately for Phillies fans, it was not as easy as putting a pen to a paper. Harper and Machado, along with their respected agents, would not budge and the negotiation process became one of the most stressful experiences of all time. Days without sleep, months of waiting, heck I even gave up Chick-fil-A in an attempt to show my loyalty to Bryce. As Machado signed with the Padres in late February, it had seemed like Harper’s decision was right around the corner. But days continued to pass, and my separation from Chick-fil-A became worse by the day. But then, it happened. On February 28, 2019, Bryce Harper finally made his decision. He would finally be coming to the Philadelphia Phillies. Featured in his contract, came a no-trade clause as well as no opt outs meaning that Harper would become a Phillie for life. To show how excited I was… well just see for yourself.

@JackFritzWIP Harper Lent is OFFICIALLY OVER. @Bharper3407 welcome to Philly!! We already love you! pic.twitter.com/x9rVmREwuo

As the former MVP winning, rookie of the year, 6 time all-star, silver slugger winning STUD, gets ready to embark on his first season with his new home, I just want to say welcome. Welcome home Bryce. You deserve to be here. I promise you that we as Phillies fans are going to treat you and your family like royalty over these next 13 years. You will never have to pay for a beer or a cheese steak again, WE GOT YOU. You are family now, and we are so excited to see you bring your talents to this great city. See you on Thursday king.

In the 1st, Bryce Harper hit one out of the park.

In the 6th, Bryce Harper hit one OUT OF THE PARK. pic.twitter.com/ufZjUEwEbJ

Did Middleton spend stupid money? I’ll let you answer that for yourself. The Phillies now enter the 2019 season with new life, a new swagger and an expectation to win. I have not even began to mention names such as star pitcher Aaron Nola who will win the Cy Young in 2019 and Rhys Hoskins who is coming off of a 34 home run, 96 RBI season. I have not yet mentioned Jake “The Snake” Arrieta who when on, can be one of the most dominating pitchers in baseball or Nick Pivetta, who is set to have a resurgent summer. How good is this team going to be in 2019 you may ask? Well, I think you are looking at a team that is going to win anywhere from 85-91 games and is a team that is a clear favorite to win the NL East. I also feel that if this team can click at the right time, they can easily be representing the NL in this year’s Fall Classic. This summer is going to be one to remember for the Philadelphia Phillies, but the scary thing is, this is only just the start.

They're loved in Philly—and feared everywhere else. Get ready for the new-look @Phillies https://t.co/V6K4uB4wdr pic.twitter.com/1MmfE01U2E